Clinical instructor at the department of physiology, Université de Montréal 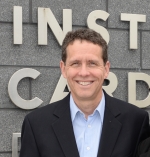 Dr. Luc Dubé completed his Ph.D. in biophysics at Université de Montréal in 1990. He first worked as medical physicist for 16 years at the CHUM, and as GBM workshop coordinator at the HND. Starting from 1999 as research associate at the CRCHUM, his contribution to research and his expertise led to two patents (NO injector and robotized camera). In 2009, Dr. Luc Dubé joined the Montreal Heart Institute where he works at first as physicist and then as executive advisor. Since 2010 he gained growing interest IN technology evaluation at BETMIS. He also acts as clinical instructor at the department of physiology at Université de Montréal (since 2014).