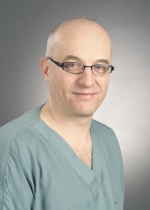 An active member of the Department of Medicine of the Montreal Heart Institute, Dr. Alain Vadeboncoeur is also the founding member of the Emergency Department at the Montreal Heart Institute (MHI), where he has served as chief since the department began in 1999. He created the team of MHI emergency doctors, co-directed renovations to the department in 2003, and planned its computerization in 2006.

Having earned his medical degree from Université de Montréal in 1988, he received his certificate in family medicine in 1990 and specialty certification in emergency medicine in 2000.

An expert in emergency medicine, he was Chair of the Association des médecins d'urgence du Québec (1998-2000) and the Association des spécialistes en médecine d'urgence du Québec (2004-2008). He is also interested in knowledge transfer, as he is active as a communicator and analyst for the media and co-hosted TV show “Les docteurs” from 2010 to 2013. He is involved in defending the public health care system as the founder of Médecins québécois pour le régime public (president since 2012), and in October 2012 he published an essay on the health care system entitled “Privé de soins.”

He is the author of many scientific publications, book chapters, manuals, papers, popular articles and seminar presentations. As the co-founder of the Groupe interuniversitaire de recherche sur les urgences (GIRU-FRQS) in 2001, he is also interested in research on service organization, care for seniors and pre-hospital services.