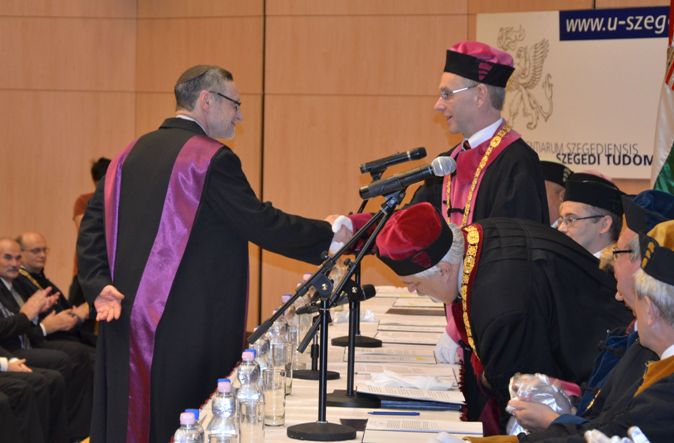 Montreal, November 26 2013 - Dr. Stanley Nattel, clinical cardiologist and Director of the Electrophysiology Research Program at the Research Centre of the Montreal Heart Institute (MHI), has received a prestigious Doctorem Honoris Causa from the University of Szeged in Hungary, one of the prominent medical schools of Europe.

The honorary degree was awarded in recognition of his outstanding research work and scientific achievements as well as the impressive range of cooperation activities accomplished jointly with the University of Szeged. The ceremony took place on November 9, in Szeged, Hungary.

Dr. Nattel joined the MHI in 1987 and served as Director of the Research Centre between 1990 and 2004. The Paul-David Chair in Cardiovascular Electrophysiology at Université de Montréal, Dr. Nattel heads a laboratory that is a world renowned leader in research on atrial fibrillation, the most common type of arrhythmia and one of the leading causes of cardiac morbidity and mortality in the world.

Throughout his career, Dr. Nattel has supervised 136 students, given over 316 invited lectures and authored over 500 scientific articles. He is the editor-in-chief of the Canadian Journal of Cardiology, the assistant editor-in-chief of HeartRhythm and Cardiovascular Research, and distributing editor of the Journal of Physiology.  He is a Fellow of the Royal Society of Canada, the Royal College of Physicians and Surgeons of Canada, the American College of Cardiology and the Heart Rhythm Society.
In addition to all of his professional commitments, Dr. Nattel continues to provide attentive care to his patients as a practicing clinical cardiologist at the MHI.
— 30 —

About the Montreal Heart Institute: www.icm-mhi.org